It makes me wonder - why only the cupcake people? 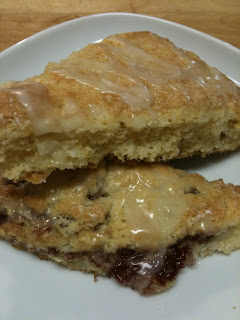 It's a Friday morning, I have sent two batches of scones, one raspberry lemon, one orange, with husband to work to share with his cubicle-mates. The orange, by the way, might just be my new favorite, I simply added some orange zest into the dough and glazed with an orange juice/powdered sugar mix and bingo, a rather delicious scone. I used a fresh orange, used most of the zest and half of the juice and ate the other half while I waited for them to bake. It counted as breakfast.
I just threw another batch of raspberry lemon into the oven - I have another request for a batch at a business.
I was half joking when I said I should sell them, I thought the people were joking when they said they'd buy them, am I starting something here?
17 minutes is too much free time for my mind these days - I wonder what a scone would taste like if you rolled it out, slathered it with cinnamon, sugar and butter (like a cinnamon bun) then folded it, cut it and baked it. Then drizzled it with a cream cheese icing, loose enough to drizzle? I could pretend it's research and I think I have just enough half and half. To heck with another coffee, sometimes you just have to take one for the team and I'll do it, all in the name of a cinnamon bun scone.
Yeah, that's where we are going now - sometimes abundant groceries in the house leads to too much freedom. I'll let you know how it goes.
ADDENDUM:
OH MY GOD. I made them. I ate one. I walked out of the kitchen, apparently I cannot be trusted. Yes, they are insanely delicious and the added butter through the middle gives them a crispier texture, they are crazy good. Here it is:
CINNAMON BUN SCONES WITH ORANGE CREAM CHEESE ICING
Blend:
2 cups a/p flour
1/4 cup sugar
1 tsp salt
1/2 tsp cinnamon
1 1/2 Tbsp baking powder
cut in:
1/2 stick butter mixed
mix in with a knife
3/4 cup half and half mixed with
1 healthy tsp vanilla
it's a shaggy, wet dough, don't over-mix.
Dump it onto heavily floured parchment paper (trust me here, it's so much easier) and pull it together into a semi-cohesive ball. Flatten with floured hands, lightly, and roll it out to a rectangle approx 1/2 thick and approx 9x13 ish.
Spread the dough lightly with softened butter. Dust a light coating of brown sugar and shake a little cinnamon over it evenly. No measurements here because it depends on the size of your rectangle, just a light coating of each. 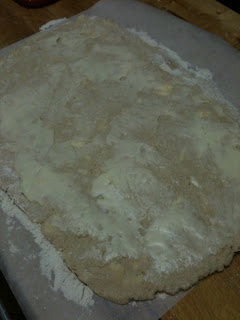 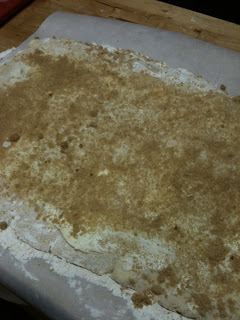 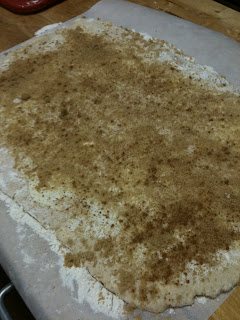 Fold the rectangle, length-ways, twice - into thirds basically. Use a heavily floured knife (I use a bench scraper) to cut into triangles. 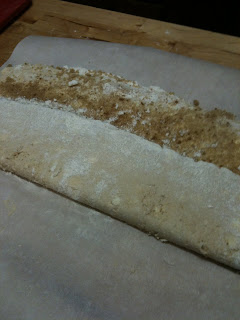 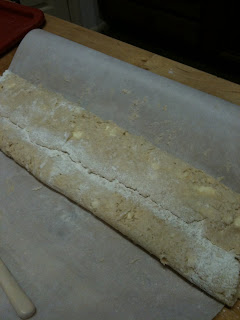 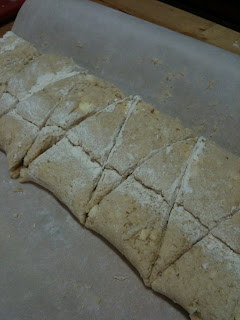 Gently separate the triangles and transfer the parchment onto a sheetpan, bake for 20 minutes at 375. Remove the scones after they've rested a few minutes onto a rack and drizzle them with this:
ORANGE CREAM CHEESE ICING
2 oz softened cream cheese
1 Tbsp softened unsalted butter
drizzle of vanilla
3/4 cup icing sugar
1/4 cup squeeze of orange juice
Mix until a thick-ish drizzling consistency. Add water if it's too thick and a little more icing sugar if it's too thin... 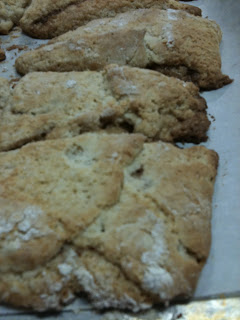 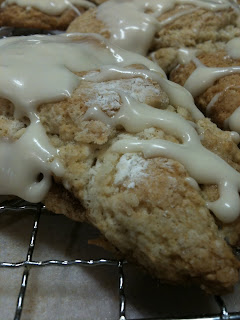 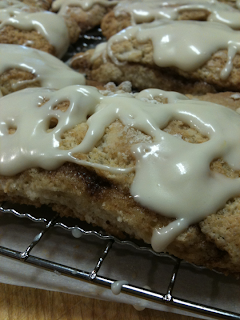 Drizzle, eat, get a cup of coffee and a book and take a few minutes to just indulge. I'm backing out of the kitchen now, I've done enough damage for the day ;-) Good thing it's happy hour after school today, it'll keep me out of here!
/enjoy!
Posted by Tracy at 10:02 AM