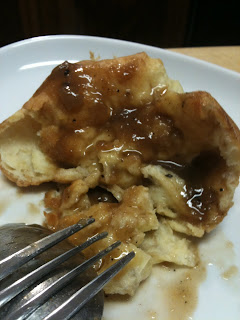 IF my mother read my blog, she'd be proud as hell that I have mastered what I think is the quintessential British side. The Yorkshire Pudding. She used to make it when I was a kid and I loved it. She would present, proudly, an entire pudding, fresh from the oven while we waited at the table and I think, if memory serves, there was usually applause involved. Maybe I should ask her again if she'd read it.
About Yorkshire Pudding all I can say is that I love it and one of the things I think I really love that it can be both savory and sweet at the same meal without changing anything but the topping. Yes please I'll have some with the roast. Yes please I'll have some for dessert. How many other foods can you say that about?
A friend talked to me today about it and I suddenly had a hankering, hankerings in my world are dangerous because they are rarely unfulfilled. Today, they have been both dangerous and completely fulfilled.
I dashed into the kitchen and made my usual pudding mixture but this time, I measured what I had tossed into the bowl! You see? I'm learning!
Do not notice my grotty old muffin pan on a grotty old sheetpan. They are old, obviously grotty but they perform for me when I ask and as a result, they shall not be retired for a new shiny set but be allowed to fall apart slowly in regular rotation in the kitchen at Casa Williams.
YORKSHIRE PUDDING
*NOTE: I will say here that I prefer the pudding be made in a grotty old rectangular metal pan that I have at the back of the cupboard. I think it should be made in one large pudding and cut up and served thus. That being said, the current passion is the individual popover and this is the one and hopefully only time I totally cave to convention and do it their way instead of mine.
Put one sheetpan with a half muffin tin on it in the oven (half muffin tin being a 6 muffin tin). Put the rack in the oven to the top, not broiler top but the high level. Turn the oven on to 425.
Combine in a 2 cup glass measuring cup with a spout
3 oz milk
(it's slightly less than 1/2 cup, there's no notch on my cup measure but I just know where I fill it to; so I looked online to determine what the measure should be and it's between the 2 and 4 oz lines, hence the arrival at the assumption it's 3 oz)
2 eggs
splash of water (?2 Tablespoons)
In a bowl combine
3/4 cup flour (sifted if you really want to be involved in a culinary moment, unsifted if you just want to eat)
1 tsp salt
Whisk the wet into the dry and whisk like crazy. Hard and fast and be sure there's no lumps at all. When you are sure you've whisked it enough, whisk it a minute more then transfer the whole lot into the measuring cup (aha! moment, so you can pour it into the muffin tins!)
By now the muffin tins are screaming hot, remove the sheetpan from the oven and put a scant 1tsp of lard in each muffin tin and return it to the oven for 4 minutes.
Remove the sheetpan (with the muffin tin on it) from the oven and divide the pudding mixture between 5 of the muffin cups. The liquid should be almost to the top of each one. It should sizzle like mad.
Immediately put it back in the oven (on the sheetpan) for 25 minutes. NO peeking, just go about your business. Chat to a friend, read a blog, decide if you are going to devour the goodness sweetly or under an unctuous blanket of sausage gravy you had in the back of the fridge.
When the buzzer goes off, then, and only then, can you open the oven and this, my friends is what will await you. 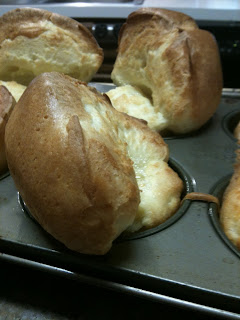 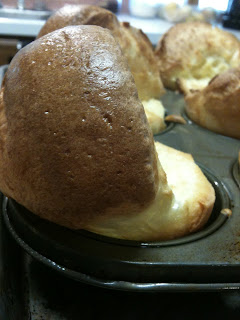 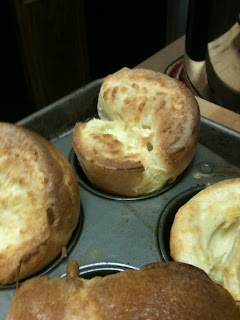 They are funky looking and have crazy uneven shapes. High on one side, crackly, leany, crunchy, light, airy, spongy, craggly, tasty, savory, chewy, are you getting how much we're loving this? 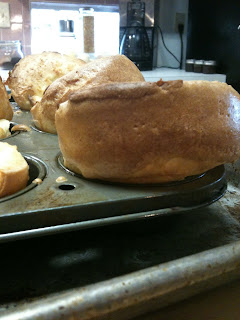 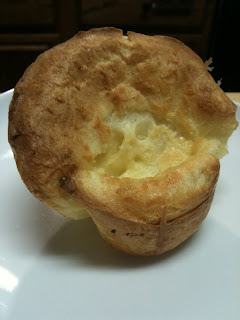 Here is the only dilemma for you, as I see it... do we devour under the brown oniony sausage gravy? or do we dive in slowly with some golden syrup (tate and lyles for the uninitiated) and some hardly whipped cream. Before you ask, yes, I had both. I'm claiming it was all for research and science the same way I claim "I'm fight with the baby weight" but my son is 11 years old. I'm doomed. 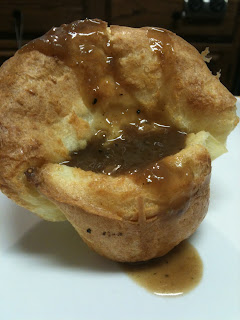 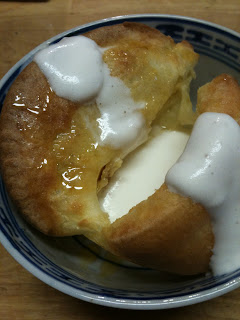