Good bye Nesco, hello InstantPot, the story of why I changed teams 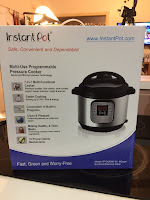 I the spirit of full disclosure, I will tell you the store of why I'm jumping ship; I like to keep you all in the loop.  I have put up my Nesco Pressure cooker.  It's been a really good product up to now I've LOVED it, but a weird turn of events in my personal relationship with the company as well as a big crack happening in the lid, directly beside a screw, (a design flaw, not something *I* did)  has helped me make the decision to move on.  I contacted the company about the flaw and they did reply!  wow!  I was told I can buy a new lid for $15? plus $12 shipping?  Well, for that $30 plus my birthday money, I could get a BRAND NEW machine so that's what I did.  In my opinion, if the lid cracked at the screw once, it might again...  so I moved on.

I have been a Nesco fan since I got my first Nesco pressure cooker.  I contacted the company to ask if I could review any of their products, 3+ years ago, resulted in the company sending me a new electric pressure cooker.  I wrote recipes and used the machine almost daily since. I loved that thing.  I told everyone I knew to buy a pressure cooker, I told strangers... most of them did.  You're welcome Nesco.  I more than covered the cost of the machine sent to me in sales by friends, family and strangers all over the world

I was contacted by a representative of the company last year and asked about reviewing their entire line.  I said SURE!  We sat on the phone for TWO HOURS while he told me about their product line, asked me for recipe ideas!!?? , asked my opinion on their website and videos.  He asked me what appliances I would like to test and review.  He to send a review email listing what we'd discussed as well as a review of the machines I was going to test/review.  I did, that very day.  I said I would hold off buying any other kitchen appliances, large or small, or contacting any other companies.  I did that, I held off... for 9 months.  I have emailed, called and tried to contact that representative or any other rep of the company to find out what the heck is going on regarding the plan to test and review and create recipes...  I was going to link to them for pete's sake..well i'm glad I didn't and it doesn't matter now because I have heard nothing, nothing at all...radio silence.

FINE, I can take a hint (eventually)  There's a million companies out there that make small kitchen appliances.  Some of those I own, some I've asked to test equipment.  I always tell you if I have been given a machine to test and review.

It was my birthday last week so I bit the bullet and I bought my own InstantPot.  I have the Duo6 QT, 7-1.  I got it yesterday... already, I think there's too many buttons and there's not even a start button!! BUT I am going to give it a try.  I believe in a fair shake.  I'm going to try to use it, even with the dumbed down button chaos, and I'll write out any alterations to my pressure cooker recipes.

I'm already 1HR 43 minutes into the 8 our yogurt process, I'll report back on that one. 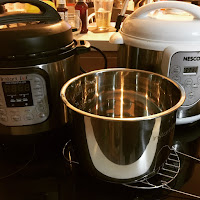 I am going to try to rework all of my recipes to also have pressure cooker versions.  I know a bunch of people who have bought them, on my recommendation, and the least I can do it supply some of MY recipes.

Just to be clear though, all the electric pressure cookers are the same, basically, some have a million buttons (ugh) and some have only a few  They all turn themselves of an reset to a warm mode.  They all sautee and they all are slow cookers, rice cookers and steamers.

I still think that every single person needs an electric pressure cooker on their counters.  I still think you should use it almost daily.  I just don't, anymore, think it HAS to be a Nesco.  Go, go get yourself a pressure cooker, some are cheap, some are expensive.  Get the one you can afford and come back here and I'll have even more recipes we can pressure cook!

Posted by TracyCooksinAustin at 10:22 AM