OK, I caved in and decided to pressure cook the vegetables... after some recent experiments that went very very right, I decided to go through my fridge, see what was there and cook them in the pressure cooker, see what happens...

I have a new pressure cooker, this one:

and I absolutely completely highly recommend it!!


Everything cooks in 3 minutes! HAHAHAHA  SERIOUSLY!

I'm not kidding, it's weird but everything I found today cooked perfectly in 3 minutes:  I don't think it was clear but I quick release all the vegetables :D

I put cut up carrots on the trivet, over some water and locked and loaded for 3 minutes.  PERFECT!
*I tossed the carrots with a little of the water, a blob of butter, salt, pepper and tarragon and put over high heat until they were lightly glazed and put them aside, covered, they reheat beautifully.

I threw the brussels sprouts from Greenling.com on the trivet, over water (the carrot water once it had cooled) and locked and loaded for 3 minutes.  PERFECT!
*I tossed the sprouts in some bacon fat heated over pretty high heat and tossed them around so they got some bacony goodness and some brown bits then put them aside, covered, they reheat perfectly!

I cut up 3 broccoli heads (with stalks) and threw them on the trivet, over water (the brussels sprout/carrot water, once it had cooled) and locked and loaded for 3 minutes.  PERFECT!
*I simply put the broccoli in a covered container, I will reheat lightly later, also a great do ahead veggie.

I cut up a head of cauliflower, with stalk, and threw it on the trivet, over water (the brussels sprout/carrots/broccoli water) and locked and loaded for 3 minutes.  PERFECT!
*I put the cauliflower in a container to reheat later, I will save some of it and make a bechemal to do cauliflower cheese tomorrow or another day.

Here's some action and some beauty shots:

All the dishes started like this:  trivet over about 12-16 oz of water and a little salt.
*I cooked these vegetables one after the other in the Nesco electric pressure cooker.  I did allow it to cool between uses as I prepared the vegetables.  I did add a little water each time to keep the level just below the strainer/steamer/trivet 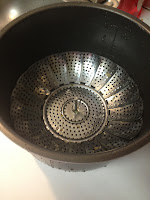 Then prep your vegetable of choice and toss them on the trivet/steamer: 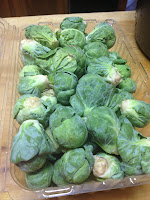 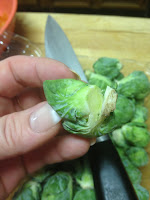 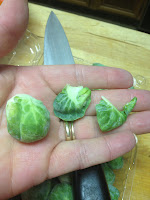 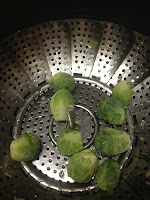 LOCK AND LOAD THREE MINUTES ON HIGH PRESSURE.  Perfect veggies, tender crisp and ready to either eat, chill or doctor up and save. 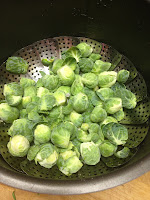 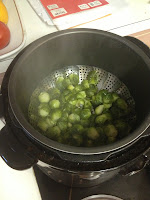 I tossed the sprouts in bacon fat and shushed them around a bit then put them aside, covered for later. 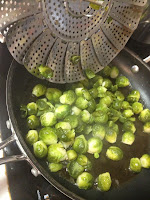 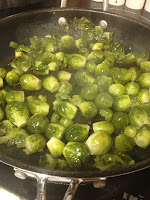 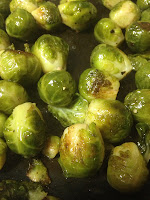 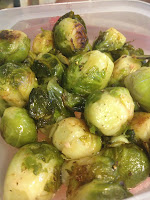 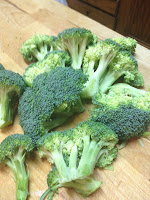 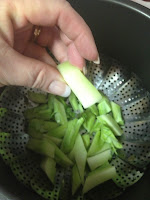 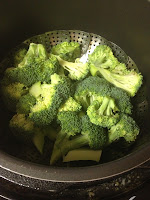 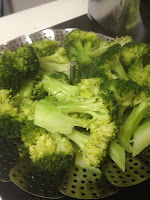 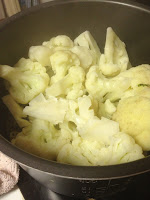 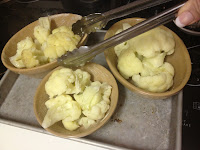 Go cook yourself some veggies... FAST!  This HAS to be better than boiling or blanching, there's no evaporation and the veggies taste so very very much like themselves this way!  plus, it's THREE minutes!  I saved all the water and will use it to make gravy with the roast chicken drippings later.  Yeah, look at me planning ahead ;)

/enjoy
Posted by TracyCooksinAustin at 1:01 PM