**** for those looking, the recipe for the 7" pressure cooker cheesecake with topping is here:
http://www.tracycooksinaustin.com/2016/09/the-pressure-cooker-creamy-cheesecake.html

I ALSO have done a fudge lava cake in a jar in the pressure cooker, oh yes I did, baby, there's also a howto video on my youtube channel
http://www.tracycooksinaustin.com/2017/08/pressure-cooker-molten-chocolate-lava.html


OK, the mini cheesecakes, there's nothing I won't cook in a jar OR in a pressure cooker

Seriously? Cheesecake, mini cheesecake, in jars, in the pressure cooker and you're just going to wing it? 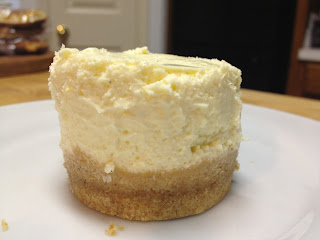 I had a kitchen alchemy day today and you will not BELIEVE how good these mini cheesecakes turned out! I created a recipe that will be my new go-to.  There is a second batch cooking now and if they turn out as brilliantly, then I'll get this post completed for you in the morning.

I have been doing cheesecakes in jars, all sorts of pies in jars actually, forever.  I laugh when I see people talking about the "new" trend, seriously?  Anyway I had to try to come up with a recipe for the pressure cooker because I'm on a mission to expand my repertoire.

You will NEVER believe the silky texture of these little gems.  These are quick to make, quick to cook (SEVEN minutes) and quick to chill, mine only took about an hour and a half.

Ok, so I absolutely cannot believe how well these turned out, crazy!  Who pressure cooks a cheesecake, well I guess *I* do now and so do you.  The taste is delicious, any cheesecake recipe will work I suppose but this is mine.  The texture is light and airy while still being dense and creamy and delicious, I am dying to hear how you like it.

Throw the crackers and a blob of butter in your fabulous Magic Bullet.  Whirrrrr and press it into 4 waiting mini mason jars.  See how pretty mine are tamped down?  I actually HAVE a wooden tamper, really, we all already knew that I would.  However, when I cannot find it in the very chaotic drawer, I just use the handle end of my biggest wooden spoon to gently press the crumbs into these jars.  Works well when we line with pastry too, just a FYI.

I get my jars here:


I'm classy like that. I cook, steam, bake, freeze and bake from frozen in them.  Take the plunge and load up on them. 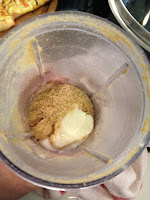 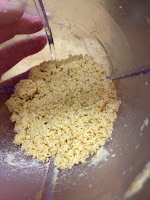 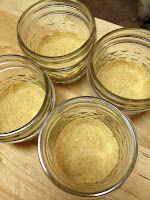 Here's the mixture, just beat the heck out of it in a measuring cup, it's about 1 1/2 liquid.  Be sure to TASTE this for the tartness level you like!!!  If you're squeamish then taste before the egg if you're not then after.  TASTE TASTE TASTE.  LOOK how evenly this divided, wow, I'm on a roll this year.  Cover each loosely with a piece of foil, just to keep the water off the top, and put on a trivet in the pressure cooker. 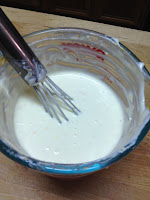 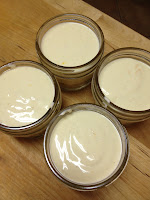 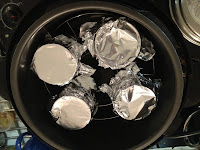 LOCK AND LOAD 7 MINUTES!  Leave to release on it's own, I left it 8 minutes and opened, there was a little squirt but that's all.

Here is one of them the next morning, I didn't tighten the foil so it separated a little more from the side of the jar.  Big whoop, I'm going to remove it anyway. Run around the side with a tiny knife, being sure you're all the way at the bottom to release the crust too, loosen the cake from the jar.  *Are there sweeter words to be spoken?* 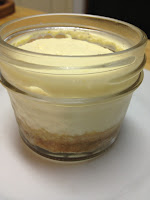 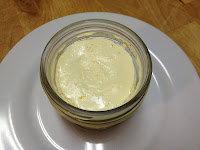 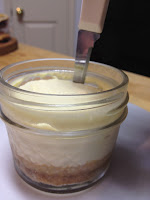 Let's just take a moment...  yeah, it's creamy and thick and ... well, we all know this is going to be good.  When you loosen it, gently turn the knife with the jar on it's side and it will gently slip onto your waiting fingers, look for a moment, avoid the temptation to pop it in your mouth and put it on a plate. 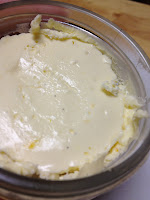 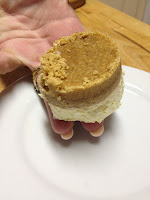 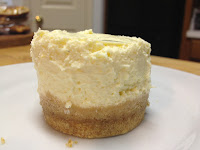 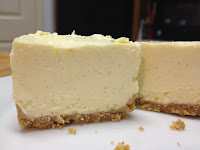 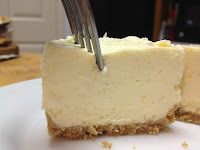 There you go, mini cheesecake in a jar in the pressure cooker.  You can tart it up any way you can think of, I'm already thinking of ways to chocolate it and will post any creations I devise.

I'm sure you have 2 graham crackers and a half a pack of cream cheese in your fridge, seriously, go make this.

/enjoy
Posted by TracyCooksinAustin at 7:19 PM