Perfectly Poached Eggs (for 1 or more than 1) 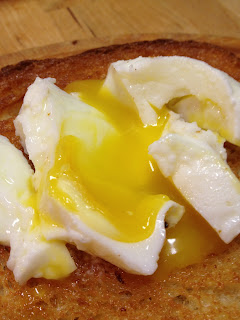 There are few things so simply lovely as a perfectly cooked poached egg.  Really, a soft yet firm white and a runny but warm yolk that runs over your toast when you break into it.

In my humble opinion, I'm a rock star egg for 1 cooker.  Seriously, it's one of the short list items I am proud of.  I have found the perfect cup, ratio and time on my microwave to produce, consistently, the most perfect microwave poached egg on earth.  Truly. I'm more proud of being able to do one simple thing equally as well every time than being able to do a major holiday meal with all 9 veggies and meats.  Sometimes simple is more important.

For my easy microwave egg for me.  I break 1 extra large egg into 1/2 cup of water in a small glass cup, it has to be straight sided for some reason, the slanty ones don't cook so evenly.  Oh and I know, I've made a zillion.  I also don't like them cooked in ramekins, too shallow.  I'm rather persnickety about it I guess.  Back to my egg, I poke the yolk with a needle, cover loosely with plastic wrap and cook for 1 minute on High (I have 1,000 watt microwave.  I drain it with my tuna can strainer, tip it onto toast and eat.

Now then, on those days I simply have to eat more than 1 egg (they happen) or if I have a friend here who wants an egg at the same time as me or if hubba or offspring want one, well that's where the problem happens.  I haven't mastered multiple egg poach cooking in the microwave.

Enter, my mother's brilliant throw away comment... 'oh, hi, yeah, I got the knife, I'm going dancing this afternoon, I made myself a perfectly poached egg in a jar this morning, I don't know what pants to wear with this sweater, oh and how's your day?"  WHAT?  You made an egg in a jar?  When did you think of that? Oh, d'uh.  I cook everything in jars, chicken pie, apple pie, molten lava cakes, cold pork pie, mince pie, apple crumble - why not eggs?  She used to coddle eggs when I was a kid in cool little egg coddling jar thingys with silver lids, I hate them.  But calling it poached eggs, and doing it in a jar, that's got to be tastier!

It's silly simple and I'm almost embarrassed to post it as a recipe.

You need 1 egg per mini mason jar.  Butter the jar and crack an egg into it, salt and pepper lightly and put the lid on.  Shove it in the fridge until you want to eat.

Bring the jar/jars out to room temperature so you don't have an explosion, only a couple of minutes. Take the lids off the jars if you are going to freak out about a sealed jar in the water, I cooked mine with the lid for these pictures but then did another sample cook without the lid, they cook slightly faster without the lid. 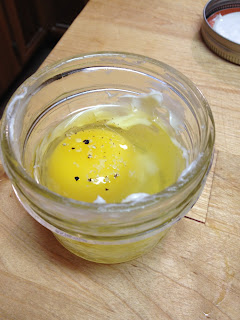 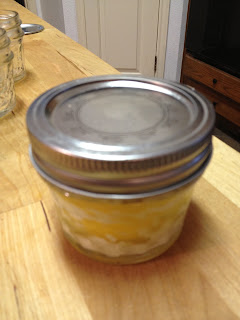 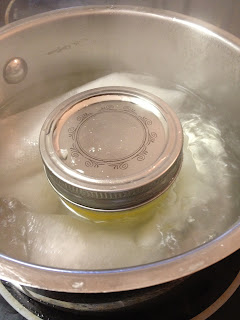 Bring enough water to come 3/4 up the side of the jars to a solid boil, throw a piece of paper towel in the bottom to prevent clacking and very loud jiggling of glass against metal.

Put the jars into the water, (IF you've taken the lids off the jars then cover the saucepan)  Cook them for 8 minutes. The beautiful thing is that you can see how cooked they are, easily, and cook them longer if you want or less if you're really into soft whites.  I am not. 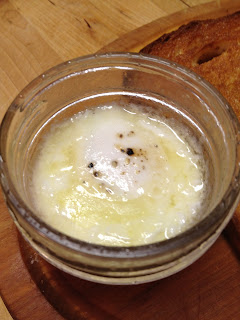 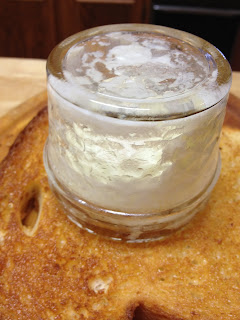 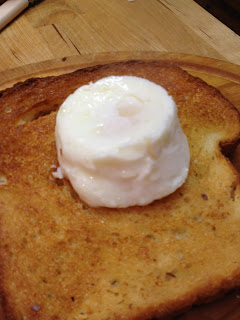 Carefully remove them from the water, use a tea towel to hold them.  Run a knife around the side to loosen and plunk on a piece of very crispy buttered toast. 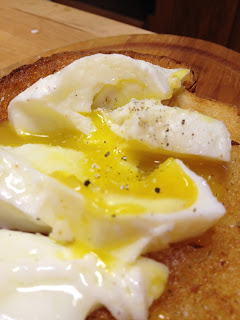 Break it open, add salt and pepper and eat.  Oh and feel free to repeat, often.


OTHER RECIPES that I make in my beloved little jars are: