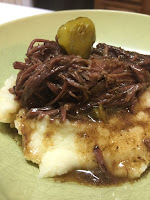 I am the first to admit I am weak and I am easily swayed, culinarily speaking.  I try try try to look away from the fad foods, the chemical foods and anything that uses a packet.  I am certain that my home made version of any packet will be superior.

THAT being said, I've been haunted by the 'roast that broke the internet', this Mississippi Roast.  There are various stories of the incarnation of the thing but the instructions and ingredients are pretty universal and because I am weak and easily swayed...  guess what we're having for dinner.

I am completely and totally and will full abandon jumping on the "but all the cool kids are doing it" culinary bandwagon and am actually making Mississippi roast.

I'm not swapping homemade for any of the chemical packets :)  I just, quite simply, have to know...

MISSISSIPPI ROAST
(in the crock pot OR pressure cooker)


For the three people, apparently, who haven't seen this recipe online

The whole recipe is to drop the chuck roast in the crock pot.  Sprinkle with one ranch dry mix packet and one packet of brown gravy mix (omg I cannot believe I'm doing this) then add a few pepperoncini and a stick of butter.

**electric pressure cooker:  BROWN the meat in the pressure cooker then pile the stuff on the same way but do add about 1/4 cup of water in and pressure cook for an hour on high, leave to come down naturally.    IF your pressure cooker has a 'slow cooker' button, use that for 8 hours if you have it.  I think the slow cooker is the best way to deal with this recipe.

IN the crock pot; Cook on LOW for 8 hours, shred or serve hunks (ahahaha) with mashed potatoes and some veg, that's what I'm doing today.  You can also serve it in a sandwich, on crusty rolls (my homemade ones baby!) as a sort of Italian beef sandwich, i'll heat up the shredded meat in some juices (I think there will be loads) and I may fry up some veggies or peppers to go along, oh and I'll slather the bread with homemade aioli, yeah, it's going to be good and tat is is how child and I are having it tomorrow mid day.

Yep, that's it.  No liquid but that roast will oooooze.

The chuck roast, unadorned, dropped in the crock pot.  These are the packets, first sprinkle the ranch then the brown gravy mix over the roast. 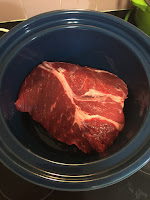 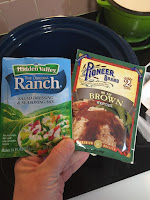 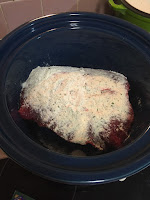 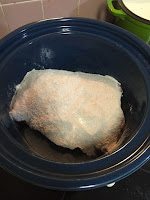 Put a stick of butter, this is unsalted because I cannot even begin to imagine how salty these packets are.  These are the peppers I got, $1 for the jar so I don't mind experimenting.  The original recipe said 2-3 peppers, well the child and husband both like pickles so i think they'll like a slightly heavier brine presence.  I may drop more in later

Throw the lid on the cooker, turn it on low and set a timer for 8 hours...  tick tick tick 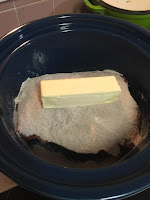 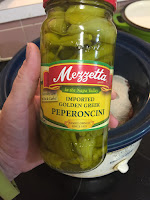 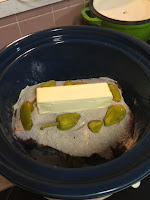 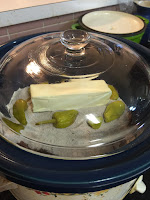 The smell of this is INSANE!  it's so sweet and beefy and I did not open it until the 8 hour mark 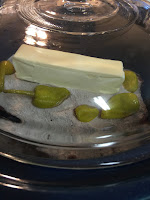 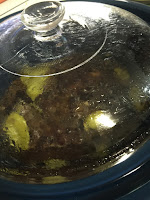 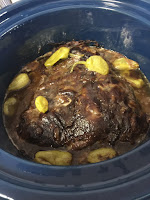 OMG LOOK!!  It's mahogany, there are crispy bits and soft bits and the peppers are smooth and tender and tart and peppery.  The meat, wow.  The meat is fork tender, I reached into the middle, stuck my fork into minimal resistance and twisted, then sampled, then twisted and sampled some more to be sure I was tasting was as good as I thought.  It's rich and dark and buttery and NOT diet food but it's got great mouth feel and tenderness without the meat being dry.  Did I say, wow? 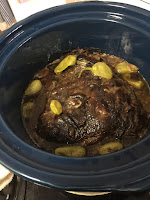 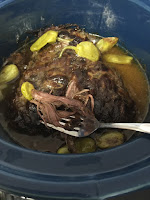 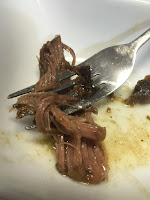 Then I went in for the corner, yeah I took it :)  I'm glad I did, it was thick and intense and sour and sweet and I have no idea how 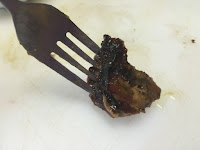 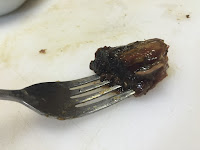 I'll post the real dinner pictures after we eat.  I'm making mashed potatoes now and will serve it up with peas and some of the sauce which I may or may not defat, depending on my mood in a little while.

I'm shocked and more than a little gobsmacked that this is as good as they say.  Am I going to make it regularly?  No, we'll have heart attacks BUT I am going to try it with pork carnitas because, hey why not.  I'll report back on that but in the meantime, if you find chuck roast on sale, grab a packet of ranch and some dry brown gravy mix and some pepperoncini and do it, you really have to give this a go.  DO not add water like some recipes suggest, stick with the classic and you'll end up with a richer product, not watered don and the meat with have more umami and be browner and, well, just go do it. 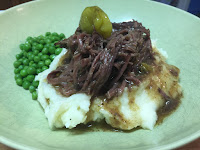