Gluten Free Pancakes , my one and only foray into the gluten free world. A base mix of a gluten free flour substitute that I simply use in my regular recipe, perfection! I kid you not, they're lovely.

Confession time:  My name is Tracy and I'm a gluten junkie.  I'm not ashamed.  I am what I am.  Sure, I'm proud of it because if nothing else, I can cook the heck out of it.

I DO, however, love to cook and I love to cook for people I love.  I happen to have one of THOSE types of people in my house this weekend.  He's one of my son's original friends (from a baby group) and I simply adore this boy.  I know he's a fan of my cooking and I can't express how much I love cooking for this kid. The gluten free thing threw me for a loop.  His family is trying it on for a cleanse type thing and I'm not going to fight or break the rules, just yet. His mother is one of my dearest friends, she's one of two people in the world that would inspire me to bother to try cooking this way.

Breakfasts? Snacks? those are more difficult for me.  I'm a bread and cheese girl.  I make pretzels and croissants for snacks and to take with me to gatherings and happenings.  Ugh, what on earth was I going to make this boy?

I promised the mother of said gluten free (by choice not medical) teenager that I would follow the culinary rules for her son this weekend and I have.  So far. :)

I made gluten free biscuits as my first gluten free attempt at baking and they looked beautiful, rose high and were layers of flakey-ness but the texture was revolting and I kind of think they taste like bird poop smells.  So, toss those.

Here are the beauty shots of the biscuit minis:  You'd THINK they tasted good.  I was very disappointed. 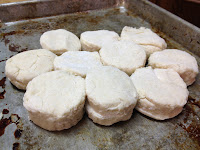 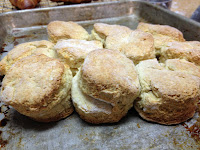 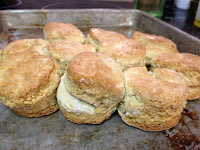 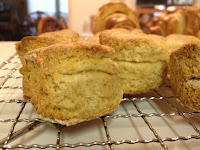 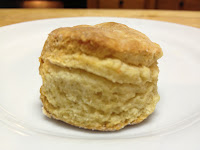 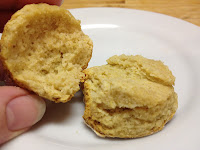 I'm not even going to post the recipe for them, they were that gross.
Sometimes, MOST times, in cooking as in life, beauty isn't everything.

Next, I tried pancakes.  C'mon, I can cook, I'm not used to such dramatic failures.

Pancakes are easy, I have got to be able to master these.

So, I made a concoction to use as a flour substitute and simply used it in place of all purpose flour in my standard pancake recipe and they were... ABSOLUTELY DELICIOUS!!!!!!  Little pillows of yummy!!

I literally did a little dance in the kitchen when I tasted one.  Then I hollered for guestchild to come down and test sample one, he was as excited and did a little dance with me too!  We'd found a FABULOUS gluten free something something that I could make for them for breakfast.  I made a mountain of these exquisite puffy pancakes and they were devoured in short order by the 14 year old boys, both who have quite discerning pallets.  They know garbage when they eat it and these, are most certainly NOT garbage.

In an enormous Ziploc bag, combine:

THAT'S IT!  Mix it well in the bag, label it and seal it.  Use it in place of all purpose in many recipes.  DEFINITELY it works beautifully in this pancake recipe.  You can CERTAINLY double or triple this combination.  Store it sealed and away from moisture, obviously :)

Preheat a griddle or no stick pan.

Put the GF flour mix and butter in a large bowl and cut in like biscuits or pastry.  Use a fork, that's fine and don't fret about being too particular, just get the flour rubbed into the GF flour mix.

Add the baking powder, sugar and salt and mix with a fork to combine.

Add the milk and egg all at once.

Stir with a fork until well combined.  Let sit for about 5 minutes.  You'll see it get puffy.  That is exactly what we're looking for.

Scoop the batter up in large spoonful, don't deflate it and drop it gently on the griddle/pan.  Cook on a medium low heat until beautifully browned on one side, flip and cook on the other side.

Cook these at a lower temperature than you would standard pancakes and I flipped them back and forth a couple of times to be sure they were cooked through.

Serve with large amounts of butter and REAL maple syrup.  I, as you know, have my maple syrup delivered by my International tester.  She brings me Quebec maple syrup in vodka bottles.  Sure, I could transfer them to other bottles but then I wouldn't have the amusement factor every weekend when I set a vodka bottle on the table with breakfast :)

Here's some beauty shots for your entertainment. 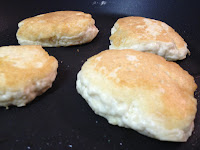 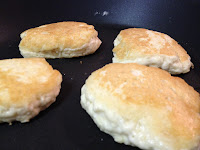 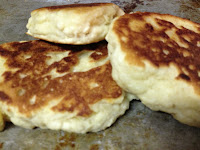 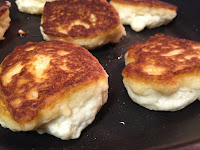 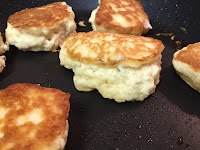 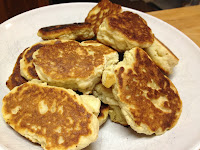 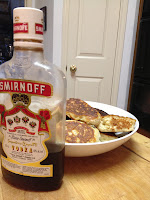 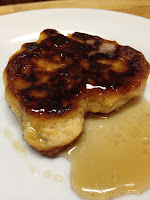 I still don't like gluten free food or the pain in the a** mile long chemical ingredient list that generally goes along with it BUT, for Heath, I'll make these, any time he wants...until they're cleansed and healthy and THEN I can fill him up with croissants, pretzels, brioche, pies, cakes, cakeballs, ciabatta, homemade cheeseburger buns, ciabatta stuffies and whatever other gluten overload that boy wants :)