Pappadeux and my restaurant love. Was I schmoozed? or has the love just gone cold? Neither, it's still love!

No recipe today... instead, I have a little story to share.

I love LOVE one of our local restaurants, Pappadeux.  It's seafood and extravagant and generally fabulous, delicious and somewhere you would probably like to go if you have some $$ to drop.

Over the years, on special occasions  I've cocktailed in the bar, fabulous.  I've eaten lunch, dinner and mystery meals in the late middle of the afternoon.  fabulous.  I take the out of towners, our of countriers (is that a word?) and we go for birthdays and anniversary dinners.

THAT being said, there was *shudder* the unfortunate cardboard crab cake incident of 2012 that about did me in.  I got teary because it was abysmal but I'm not supposed to complain or comment when I'm out so I had to suffer until it blew out of me.

The usually delicious, plump, juicy, flavorful, crispy, soft, crab cake came to be as a thin, hard, dry, cardboard-esque slab of nothingness.  Now then, all restaurants have their glitches, however on this day, I told the waiter who ARGUED with me.  Oh no no no that's not OK.  I got teary, my table mate was furious that I'd SAID anything, my birthday dinner was ruined, painful to just get through, I hated it, I hated every minute.

I went back a time or two but frankly, the bloom was off the rose.  I usually took my mother, from out of State, when she came but we started to go to Pappasitos (my NEW MOST FAVORITE)

I, sadly, lowered my expectation of Pappadeaux.  Frankly, I was starting to arrive there prepared for unpleasant staff and potentially disappointing food.  I'd order 'safe' things and never repeated an order in case it didn't live up to memory. That's no way to feel when you're about to drop $50 (that I could make at home :)).

Last week, I got a last minute "let's go for a drink and a fabulous lunch" call from a friend.   She said Pappasitos, which delighted me!  I jumped in the car, braved the construction on the roads and rushed there.  When I got there, she wasn't to be seen so I called.  She was already into cocktails when we realized she said Pappasitos but MEANT PappadeauxI called to ask where she was so I just walked over.  I shared the story of the bad food and waiter with our new favorite waiter, Preston.  Preston then shared the story with his manager, Sarah.  Sarah came over and apologized and was absolutely charming.  She said they were taking care of my crabcake as a "sorry for your bad experience, thanks for coming back in" gesture.  DELIGHTED!  That's the sort of customer service I'm used to here in Texas and any less shocks me now. 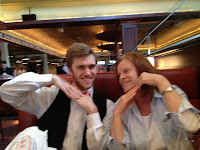 Did I mention that Preston, our waiter, was positively charming as well?  There were a few glitches in translation of definitions of specific cocktails but nothing that's a deal breaker.

OK, look, I asked him to pose like this with my girlfriend, I said the way to tell if someone is truly sweet is the "side hand shelf" post... and look, he DID!  He doesn't know us but he played along.  THAT is why we are going back today.

The meal was lovely, even though they changed their sweet potato strings to regular potato springs which sort of taste like french fries.  HOWEVER, the ambiance is fun, the staff is lovely and the company was fun.

The crab cake redeemed itself.  It was plump, delicious, filled with crab, lightly fried with crawfish and a beurre blanc.  I don't like the french fry strings they put on now but it's not the end of the world, I just flick 'em off.

OOOOH, look how DElighted we are at our BEAUTIFUL food!  Hardly hamming it up at all!!  HAHAHAHAHA   (yeah, we're very very silly ;D) 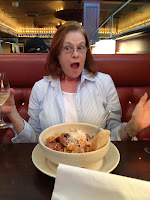 After a short time, Dean, the GM, came over.  I love a table side visit from a GM. He was charming.  He even seemed interested in my rant over potato vs sweet potato strings on food.  If I WANTED french fries, even skinny ones, I'd have ASKED for french fries.  He gave each of us his card and asked that we call when we are going to come back with girlfriends.  I was going to suggest we go to Truluck's but I think we may hit Pappadeux instead.  CHARMING!

Since last Friday, I called and left a message, I called and got no answer and I called and was disconnected when I asked for him.  Hmmmmm.  I'm not saying for sure it was ME but 3 strikes and you're out. 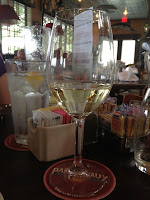 Some girls and I are going to lunch.  We like to cocktail then nibble then giggle then cocktail some more and nibble some more. We don't hurry.  I tried to call the GM, since he DID give me his card, he DID ask but again there was some inability to transfer my call from the phone at the desk to wherever they were trying to connect me. That's one too many calls... nice sentiment but I'm wondering if maybe I was schmoozed? maybe I need to move away from this restaurant and the love that's been no good for me.  I'm not feeling the love.

I get that GM's are busy but if the staff can't forward a message or the GM can't call back or the front desk can't transfer a call; c'mon, maybe it IS me?

For reasons still unknown, we have decided to go over there today for our Ladies who Love to Lunch.  The original plan was 5 at 11:30 but life takes over so now we are 3 whenever we get there.  No worries, we 3 are a hell of a force :) 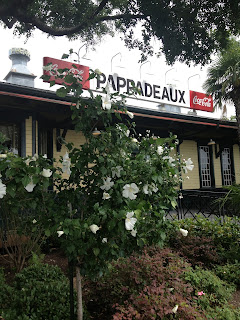 I am going to eat, drink and be merry.  This is the last chance for this place.  I'm also pretty sure I'm going to share the story with the waiter of how we almost didn't come today.  I wonder if we'll see the GM ......


WELL!  I'm home :) Lunch lingered 3 hours at the restaurant then moved to my backyard where the wine flowed and "lunch" continued another 5 hours.  If nothing else, I KNOW how to do this!

We arrived at the restaurant and were greated warmly.  Sarah was there and remembered us and took care of us.  She seated us, chatted about our recent experience and I told her about my blog and my story and she made sure we were very well taken care of.

Our new favorite waiter, Mark, was as good a sport as Preston had been the week before.  Dean even came out of the kitchen, to greet us, and said he'd make sure our food was sublime.  It was.  I don't think I've ever had a better meal at Pappadeux or at any seafood restaurant in Austin, if I'm honest.  It was THAT good.

We had wine and we had 3 fried oysters to taste before we ordered.  I'm not usually a fan but they were crisp, lightly breaded and the oyster was moist and tender and not a little rubber ball.  DElightful.  I'm suddenly glad we came back.

I had the seafood grill... it was perfection.  I can't even begin to describe the subtle flavors of the seafood, the crisp slight char on the veggies or the perfectly separated highly seasoned dirty rice.  The melted sweet butter and uber fresh lemon wedge, sure standard things but with a little flare and extremely fresh and joyful on the plate.

The fish was perfectly cooked, the scallops were merely kissed with heat through to their centers, the salmon was pink and slightly underdone in the middle so the rest couldn't overcook.  The whitefish was like a pearl before me.

Seriously, I'm not a gusher but it was THAT damned good.  My friends had equally as delicious, perfectly prepared meals.

My skewer...  perfection.  I haven't had such a combination of food that was so perfectly cooked in a very long time.  Skewers are hard!  The shrimp was perfect, a slight char on the outside but they still popped when I ate them.  I shared with the girls, but I didn't want to.  I didn't want to even a little itty bitty bit but I did. 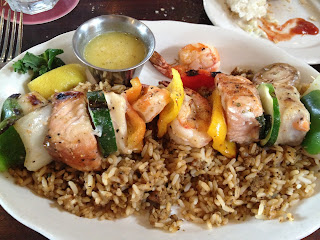 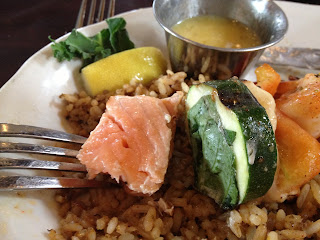 Peggy had the Mahi with crab beurre blanc and polenta.  It was amazing.  Suzann had Tilapia with shrimp and crap and parmsean risotto.  Perfection. 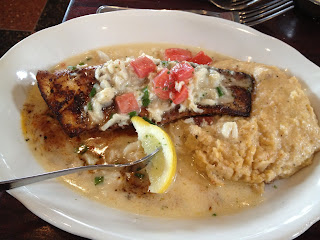 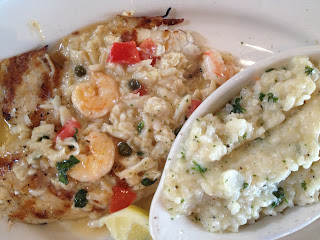 Mark entertained us with stories, kept us entertained and well doused in wine and cocktails.  It was a lovely time with lovely people and simply exquisite food.  This trip to Pappadeux was a trip back in time, to when I first arrived here in Austin and we went to gasp at the sheer delight of the food.  It's back on the top of the list of places we need to go with the Ladies who Lunch, the Moms who need Margaritas.  It's the top of the list for the out of towners, the hot spot to take the relatives from across the pond and across the border.  THIS is my goto once again. 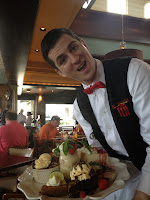 Mark (what a good sport!) did use his charm for evil purpose and he tempted us with the standard dessert tray.  Then he told us about those special items that were NOT on the try but that he knew would delight and thrill us...

Bastard...  we were weak and caved.  Moments later, before us appeared the Bananas Foster Crepe filled with Hagen Daaz vanilla ice cream and drizzled with chocolate and caramel.

There was a strawberry on top so we justified devouring it by the fact fruit is healthy... so the plate was technically health food.  Bananas AND strawberries, c'mon, it's a fruitplate!   :)

LOOK! what we ate! Seriously, sometimes it's good to be me and at the moment in time this food was on the table, it was that EXACT moment when it was VERY VERY good to be me. 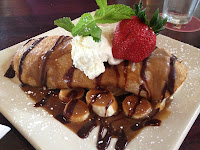 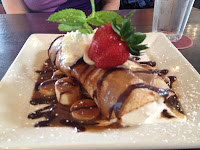 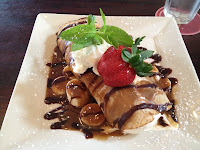 I've forgiven Pappadeux.  In my opinion, the crap crab was an anomoly.  The GM not returning a call was unfortunate but not a slight. The rude waiter last year was the exception, not the rule.  I don't think I was schmoozed.  I think they were genuinely apologetic and genuinely happy to see us back.  I think they can cook a plate of seafood as well or better than any place in town.  I'd easily put them up against Truluck's and they're not nearly as expensive.

Take your out of towners, your special someone or just a couple of girlfriends for lunch, it's worth going.

I'll tell you though, I need to take you the Pappasito's, you're going to faint over the crab stuffed shrimp over there.  Yeah, I'll take us there next week.  Until then, go drop some cash at Pappadeux, tell them I sent you if you go the restaurant in Austin.  Let's make some noise.