So, you fry a pound of bacon until it's crisp and then chop it up.

HA!  got your attention, is there any recipe on earth that can be BAD starting like that?  This is one of those oldie and goodie recipes. The church ladies and regular folk made it and took it to whatever function was being attended at the moment.  It comes in and out of fashion.  I used to make it as my standard party piece but then it fell by the wayside in favor of me making some other new and more interesting salad.  Well, it's come around again by way of my dear friend who asked me to make it 'again' and I took it to her house today and we ate it, and we loved it, and it's back in rotation so I thought I'd share it with you.

1 lb bacon, cooked and chopped
1 head cauliflower, broken into tiny florets
1 small iceberg lettuce (it HAS to be iceburg lettuce, there's something wonderfully old fashioned feeling about having a chopped iceberg salad)  anyway, shred the lettuce.
*IF you want it to be more substantial, you can substitute shredded cole slaw mix in place of the lettuce, it's a different creature all together but it's as delicious and it's heartier and will hold longer

THAT's it!  Seriously, throw it in a big bowl.  The secret, is the dressing:

1 cup mayonnaise (not miracle whip or salad dressing, use real and full fat or don't bother making this)
1/4 shredded parmesan cheese (or a little more if you like)
1 Tablespoons sugar
**I add a number of grinds of freshly cracked black pepper but it's not "officially" in the recipe ;)

Mix the dressing separately and then toss it all together at the last moment.  DEVOUR with abandon!

I felt obligated to take some quick pics as I made it, i'm a little embarrassed it's so quick and easy.

Ok, cook your bacon.  This is a lb and I cooked it in the oven at 425 for about 20 minutes, drained on a towel then chopped it up.  I saved the fat in my bacon fat jar :) 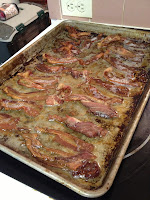 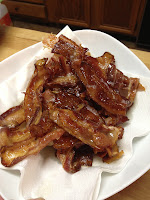 Look at this lovely cauliflower!  I break it into quite small florets and then chop the stalk small and include that.  It's so tender and flavorful, even raw.  Do it. 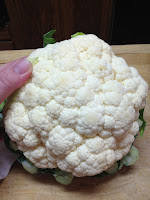 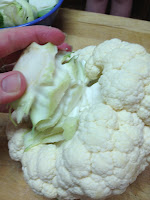 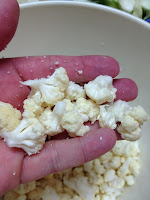 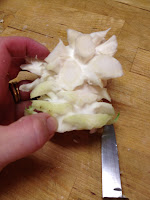 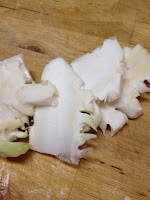 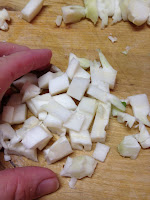 The dressing, I just toss in a measuring cup and leave in the fridge until I'm ready to mix it.  Mix at the last moment, the lettuce doesn't hold up well. 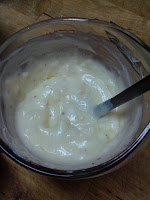 Toss and eat with joyful abandon, it's SALAD :)  I love this with brisket, shredded and piled high on homemade rolls... hmmmmm  that gives me an idea 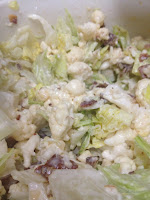 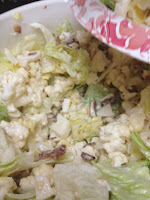