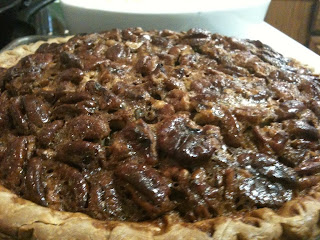 I may have one of those, "Life is uncertain, eat dessert first" moments tonight.
When we were in New Mexico during March Break, 2010, a friend gave me pecans. (C&R Pecans for those who want to get some from them, I think they ship, call them and ask. The contact information is at the bottom of this post, tell them I sent you! ) I love friends who give me pecans. I live in Austin where they fall from the trees downtown but still have to pay a fortune in the store. Luckily I know people here with trees but today we have a haul from NM and it's those beauties we'll be using!
Husband isn't a fan of sweets, or treats, or food or really anything so I am on a constant mission to get some reaction other than "cool" out of him ;) . That being said, I love to cook and would either way. Husband and Connor had their first father son day today and I was inspired to cook for them. A little something special for each.
Connor's favorite (or one of them) meals I make for him is a cheater chicken divan. (will be posted later) I roasted off 4 chicken breasts when they left then wrapped them in foil to keep warm and moist till I needed them. For Husband? Pecan pie, who can resist it??
In a store bought pie crust (hey, I'm not a fanatic!) dump a thick layer of pecans. Yes, I hear my mother cringe from 1,600 miles away. Hey, she does pastry all the time, I do it a portion of the time. Sometimes, though, you need to utilize the brilliance of those who make pastry for you and toss it in the freezer! I'm just supporting Pillsbury ;)
The pecans are "Burkets" and apparently one of the best! *thanks Gloria! Ray! Don! Heather! Brantley State Park! and New Mexico in general! 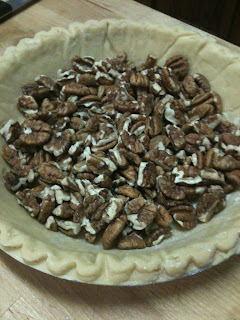 In a large mixing bowl combine:
4 eggs
beat like crazy then add
1 cup corn syrup (I cheat and substitute 1/4 cup of Tate&Lyle's Golden syrup but really, just pure corn syrup is fine and delicious it just won't take like mine *grin*)
1/3 cup brown sugar
1/4 cup white sugar
1 large teaspoon vanilla
1 tsp salt
whisk like mad then add
4 tablespoons soft butter
whisk
Now, this is not of the faint of heart! This looks completely curdled and separated. Worry not, trust me and beat it in the best you can, it'll be relatively smooth but don't worry about the butter globs. Can there be anything wrong with a good ole blob of butter? 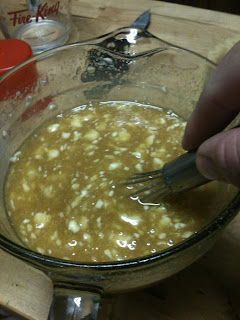 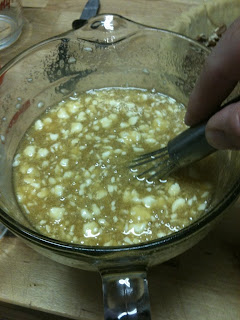 Pour the mixture into the waiting crust, add more pecans if you like, they float. You can add up to about 3 cups but I think 2 and a bit if perfect. 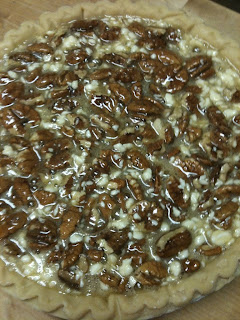 Put the pie on a sheet pan and put in the oven. Bake at 375 for 45 minutes then check it. It should be set around the edges and a little jiggly in the middle. If it's just too jiggly then bake in 5 minute increments up to 55-60 minutes. Don't let it bake all the way through, it won't be so, um, smoothly delicious. 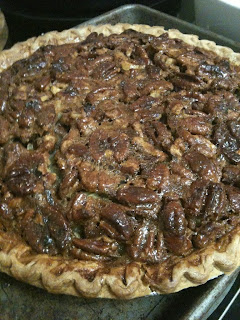 Leave it on a rack to cool. Go shopping or lay a floor, you need to be busy, it's a hard wait!!
Slice, eat. You can serve it with ice cream or whipped cream or custard (which is how I will have it later). You can throw a few chocolate chips on top when you take it out of the oven if you want as well, that's quite nice! Connor thinks he's a fan of chocolate pecan pie but will only eat one slice and I didn't want to chocolate the pie away from husband so it's plain today. I may drizzle chocolate sauce on it for Connor if he wants some later, we'll see.
The money 'slice on the plate' shot will be around later, check back in a few hours! This is a quickie pie to throw together, the middle is soft and smooth and silky and yummy. Put it in your repertoire and you'll be a happy soul, and so will the people who come to your house for dinner!
/enjoy
C&R Pecans, Carlsbad, NM
http://national.citysearch.com/profile/6988457/carlsbad_nm/c_r_pecan_landscaping_inc.html
Posted by Tracy at 3:44 PM