The baguette - I did it 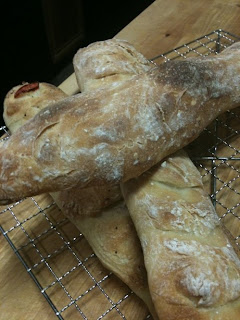 Sometimes, very little needs to be said, this is one of those times...here is my Friday morning, in pictures
I made baguettes. I found a few recipes in the old old cookbooks and morphed them into a version that ended up being very similar to the p'ain ancienne that everyone is abuzz about.
Mine was a simple, gloppy dough of
3 1/4 c a/p flour (plus a little for dusting the top if it needs it)
1 1/2 t salt
1 heaping t yeast
1 1/2 cups ice water
I dumped it all into my beloved kitchen aid with the paddle attachment. I beat the heck out of it about 2 minutes (it might need a little more flour, depending on your day/weather/house/flour so sprinkle in more by the tablespoon; the dough should just start to pull away from the sides of the mixture but still be very sticky at the bottom) When it began to look like it might become a dough I switched to the dough hook and beat it like hell for 6 minutes. I switched to the hook not because this is a firm enough dough but because it has a lip on the top which stops the dough from travelling up into the innards of the machine. 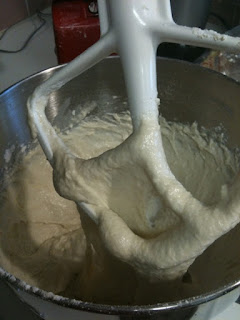 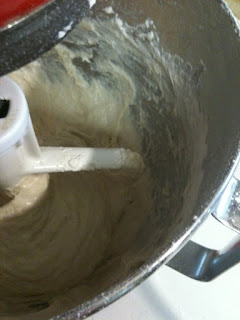 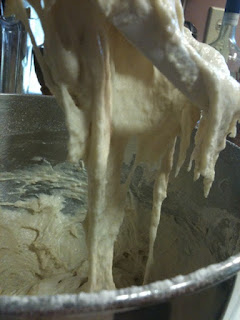 Blech, as you beat it, it'll start to pull away ever so slightly, this is when you switch out to the hook and then beat it for a good 6 minutes on medium high, it'll flap, smack, whack around the machine, cleaning the bowl completely on the sides and become incredibly shiny. 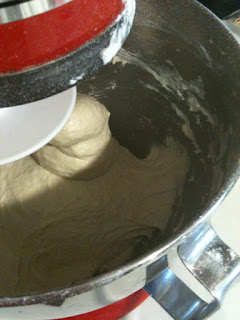 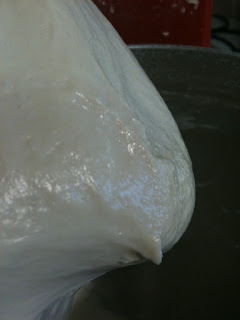 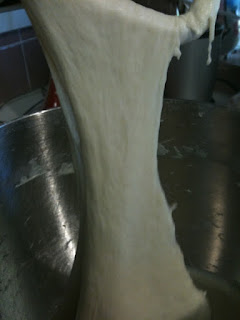 The resultant dough looks a little like, well it makes my 11 yr old son giggle every time he sees it if that's any hint. It is VERY slimy and very shiny and sticks to everything. 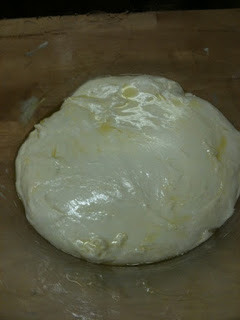 Drop/pour it into a greased bowl (I use olive oil) and flip it over with a spatula because you don't want to touch this stuff!
Toss the bowl, covered, into the fridge and forget about it.
The next day pull the bowl out of the fridge and leave it on the counter for 3 hours. I took it out when I drove Connor to school at 6:30 and by the time I ran a quick errand, had a shower and dealt with the monotonous dealings of the day, read laundry, dishwasher and pets, the dough had come to room temperature and easily doubled, that was 8:45 am.
Dump the jiggling mass onto the floured counter and split it into 3, stretch each piece out, kind of gently, to the shape of a baguette. I like long and skinny, you can go short and rounder if you want. I picked up each chunk of dough, rolled it gently an shook it out like I've seen noodle makers do on tv until it was long enough. I did cut the top of them with scissors in an attempt to make them look artsy, that failed and next time I will razor them as they go into the oven. I lay each one on a parchment covered sheetpan and left it to the side. I added some olive oil, salt, tomato to one because I needed to use some of these tomatoes. 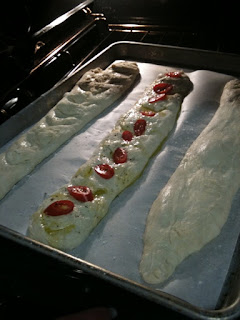 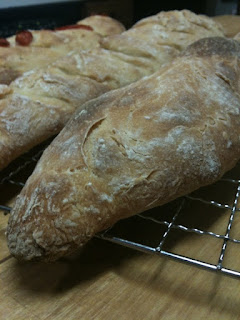 Crank the oven to 500 and put a cast iron pan in the bottom. By the time the oven is screaming hot the bread is rested enough, no worries about doubling in size here. Put the sheetpan in the oven, toss a large handful of ice cubes onto the cast iron pan and close the oven.
I baked for 10 minutes, added more ice and went another 15 minutes. Your oven will cook differently, just go till it's the color you like!
Put on a rack and try really hard not to rip it apart and eat it immediately. I set a timer to wait for 15 and managed to wait for 12 before I ripped it apart, took it's picture and devoured. No, I won't tell you how much I ate. 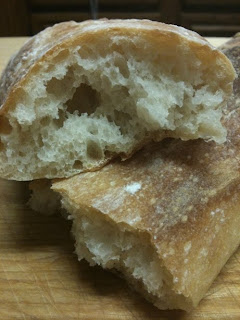 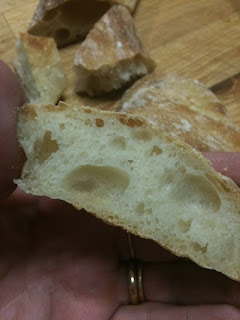 The crust is crisp and shatters, the crumb is chewy with a little tang. It actually has flavor which is missing in so many artisan breads you buy. Sure, it takes a day to make but that's really 24 hours you can ignore it. It's easy, delicious and you should go and make it, now.
/enjoy
second day quality control sample worked just beautifully :) 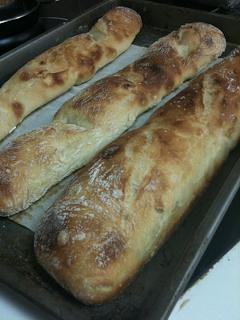 Email ThisBlogThis!Share to TwitterShare to FacebookShare to Pinterest
Labels: baguette, bread, how to make baguettes