It’s hot and muggy and already over 90 in Austin, Texas. It's only May and we’re doomed now till October when it cools off (hahaha) again. My happiness' generally lay in homemade breads and thick, hearty, soups and stews; heavy meat sauces and rich curries. I have to try to play nice with the kitchen, the thick air and the air conditioning bill and I’m going to try something lighter. *cough*

I’ll be honest, it’s Friday and I would usually be at happy hour, $2.50 margaritas at my local Serrano’s but my partners in crime were busy, it’s been a long day with friends and holding a friend’s new baby so it was straight home after school. I opened the fridge with an unknown hankering and there were strawberries staring at me.

The local grocery store (HEB) had a sale on pints of strawberries. I’m not a fan usually but a friend told me about a pie she made and it got my juices flowing. I asked for a “recipe” (like I can follow one – um, no) and she lovingly wrote out her own adventure in getting a strawberry pie on her table. I’m taking that information, wrapping my spin on it and seeing what we end up with. I like doing it this way, a list of ingredients, some time to play and a captive taste tester. I poured myself a Merlot and forged bravely ahead.

I don’t know if kiddo likes strawberries (he’s 11 and is ‘developing new tastes as I mature so you don’t really KNOW what I like, mom!’ so depending on the day it’s anybody’s guess). He’s a good eater and has a reasonable pallet so, game on. This is what I found in the fridge, so this is what we’re using. 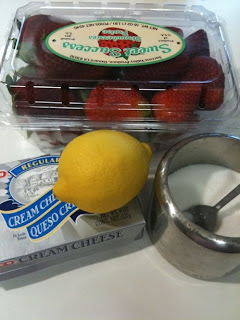 Bake or make a graham cracker crust. It’s actually cheaper to buy them, they frequently go on sale, grab a few and keep them in the cupboard, trust me, you will use them. I pretty consistently bake mine off at 350 for about 10 minutes then toss in the fridge to cool down/harden while I decide what filling I want.

Next, I pull forward “big red” my beloved (read ‘kitchen aid’ for the uninitiated, it lives on my counter, tucked between the coffee maker and fridge although I’m sure it’s more important than both – well, ok, not the coffee maker)

Drop the cream cheese in the bowl of big red and beat the heck out of it, scrape it down a bunch. If it’s room temperature that’s the best, if it’s cold you’ll just have to keep beating until it succumbs to room temperature and gets smooth and creamy, this is no place for lumps! 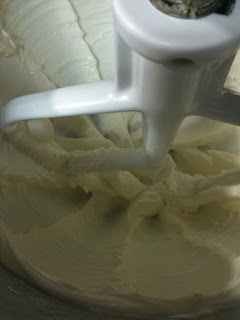 Squeeze half the lemon over the cream cheese and beat beat beat some more. You should really have a glass of wine with you to kill time between beating and tasting.

Measure a few spoonfuls of sugar over the cheese and, say it with me, beat beat beat. Basically what we’re doing here is beating, adding sugar and tasting until you like it, less sugar if you’re in a tarty mood and more if you’re in need of serious sweetness.

Take the shell out of the fridge and dump the cream cheese in the center. All the beating (with the paddle attachment) has made it thick and glossy with almost a marshmallow feel. With some gentleness, spread the mixture all over the bottom and side of the cracker crust. It’s not a thick coating, generous enough though, it’s pretty rich. 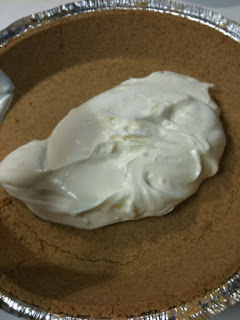 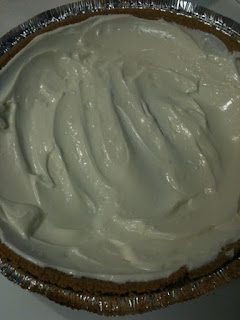 The pint of strawberries were on sale for $1 which is why I bought them. I rinsed them off and proceeded to cut them into little pieces. Some people are slice people, some are little piece people, I’m the latter. I think kiddo would prefer little pieces too, if he’s into pie today.

This is where I got creative and made it up as I went along. I squeezed a little lemon over the strawberries and sprinkled maybe 2T of sugar over them. I also put in a pinch or two of salt, salt makes sweet sweeter, you’ll miss it if it’s not there. I tossed them about in my favorite Ikea giant glass bowl and threw them in the microwave for 1 minute. I stirred, sprinkled another little bit of sugar over, back into the microwave for another 30 seconds. I could smell them so I took them out, tossed them a bit and dropped them into the crust, into the fridge and there it is, waiting to see what happens. I love science. I’ll get another glass of wine while I’m waiting. 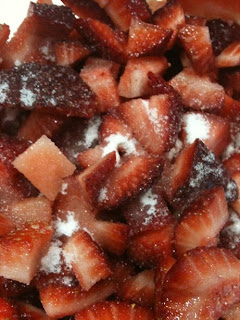 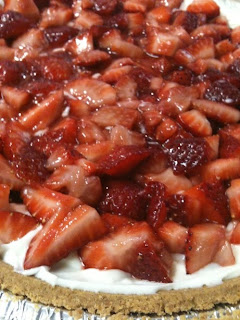 Moment of truth, it’s been a hour and a half. 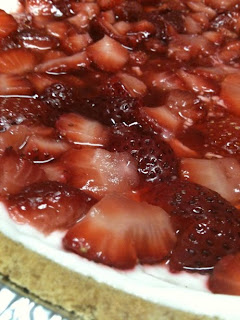 It doesn’t look much different than when I put it in the fridge, that’s got to be good. There’s a little more juice, the warm strawberries melted the sugar and I think a little pectin action happened. There’s not really a glaze on it but it looks it. When I slice it, it cuts clean, the strawberries stay nestled into the cream cheese base, there’s a pink tinge to it where the strawberries have given forth of themselves to make the few ingredients who only met each other a mere hour and a half ago, a true family.

Ok, I am going to try to be brutally honest here, without blowing my own horn. It’s the most delicious pie I’ve ever made. Kiddo came dashing into the room hearing my squeals of delight and asked in his most nonchalant preteen manner, ‘pie, mom?’ *he’s clever like that.

I asked him to sample it for me, for the sake of the blogs, son. Take a moment, I said, to think about taste, the texture, the play of sweet and sour and savory and crunchy and soft and smooth. He assured me he could be objective. He took his obligatory bite, stood back, thought about it and dove for the pile of clean plates, “can I have my OWN slice?” *the highest praise imaginable* This is the child who doesn't like sweets because they're "too sweet" and if given the option will always vote for the savory pie over the sweet. Here is his before, and his after...yay. 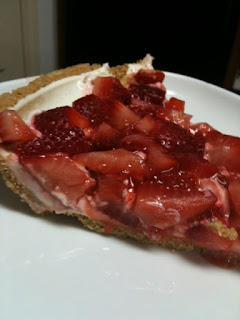 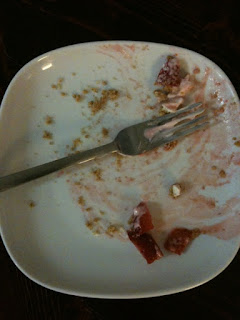 So, the strawberry cream cheese pie is an incredible success. The cost was $1 for the strawberries, $.99 for the non brand name cream cheese, .25 for the lemon, the sugar was in the house and the cracker crust was $1.29. This is sort of a no brainer. I need to buy more strawberries – since it’s the season – and freeze them, this is a keeper!

** Thanks to SA for the original thought and her own chaotic strawberry pie creation.

Email ThisBlogThis!Share to TwitterShare to FacebookShare to Pinterest
Labels: cream cheese pie, how to, strawberry pie