Fish and Chips, but this time without the Chips 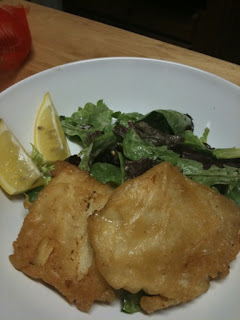 I wander grocery stores. I kind of like it, I find it peaceful in a weird, overcrowded "I don't really know what I want here"sort of way. Sometimes I have a list, sometimes not. I am of the old school of seeing what’s fresh, what’s plentiful and that’s what comes home for dinner.

Cod was on sale the other day for $3.99/lb, that resulted in a direct and instant craving for fish and chips. I bought 1 1/2 pounds, I wanted flaky fish with a crisp coating and I wanted it now!

Take a large bowl (my beloved Ikea glass “triangle” bowl) and put 1 cup of flour into it, season heavily with salt and pepper. Crack an extra large egg in and stir around to make a horrid gloppy mess. Open a beer (and who doesn't think that a lovely addition to any food blog) and pour the beer into the batter until it’s the consistency you like. It should be akin to heavy cream. I can’t give an exact measure here because it depends on the flour, the egg, the beer. Whisk like mad until its smooth, cover and put in the fridge to relax and think about what a lovely coating it’ll make. I left it about an hour; I think I did laundry.

Heat up about 1 ½ inches of peanut oil in a very wide frying pan over better than medium heat until it was hot enough to turn a piece of white bread, brown. Throw a square of bread into the oil when it’s cold, when it turns brown, the oil is hot enough to fry in. That’s the temperature trick I learned way back in the day and even though I have all sorts of gadgets and thermometers here, I still take the temperature of oil the same way. I think sometimes I’d be handy on a desert island. 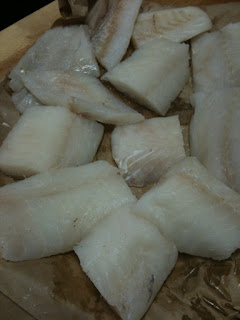 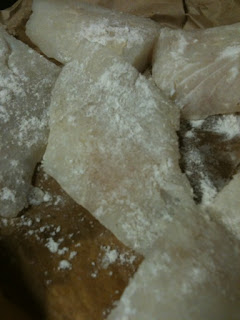 Get the fish out of the fridge and cut it into hunks about 2inches squares and season heavily with salt and pepper. Dust them very lightly with flour, I dusted them so lightly I can’t really even justify saying they were in fact, dusted. It was as though flour was breathed upon them. Dip the fish into the batter and lift it straight out, letting the excess drip back into the bowl. 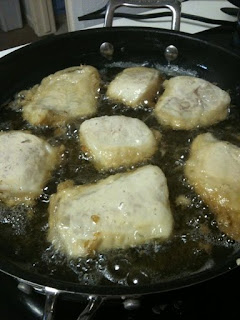 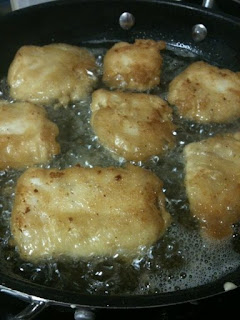 Lay the fish in the oil, it should bubble like mad. Don’t crowd the pan, but you can cook enough to fill the pan so long as they aren't touching at all. Cook it until it’s brown around the edges, 2-3 minutes then flip it gently over and continue to cook it until the other side is pretty too. Another 2 minutes maybe? 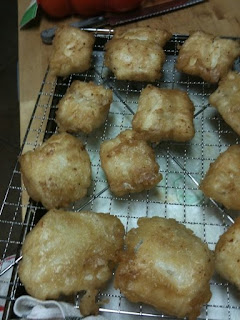 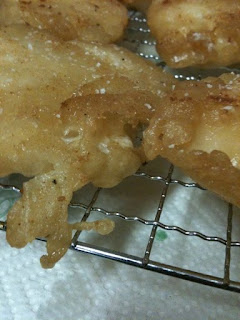 Lay out all the fish on a rack over a paper towel, salt liberally, and hold them in a 300 degree oven. They stay crispy for quite a long time which surprises me, I don't know if it's the batter, the oven, or the kitchen fairies. It makes cooking up a big batch of these little darlings easy and less daunting when you don't have to worry about holding fried foods with the perpetual fear they'll sog out on you. In the kitchen, for me, there are few prospects more frightening than a sogged out fried anything.

I could eat it every.single.day.

If I’m passing on the salad idea, I like a little aioli with it; that's another post. Dip it in whatever you like fish dipped in, tartar, cocktail sauce, thousand island, ranch dressing, or straight mayonnaise. Don’t dip it. Serve it formally with knife and fork. Throw it in a warm tortilla with some shredded cabbage with chili mayonnaise. Use your hands, use a knife and fork, whatever it takes. Make this. Eat this.

Email ThisBlogThis!Share to TwitterShare to FacebookShare to Pinterest
Labels: fish and chips, fish batter, fried fish, how to fry fish