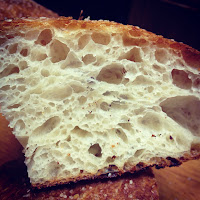 I'm sort of over new bread recipes, I'm into playing now, playing with the recipes I have and working them different ways.  Same ingredients, different method.  This was quite the shocker!

There aren't instruction pictures here, it's a conversation about method and then the final product shots.

I wanted a hard crust, a soft yet chewy and very airy interior and I wanted to make one giant loaf instead of messing with smaller ones.  I wanted to grab the whole loaf, cut it down the middle into slices or rip off hunks  and eat it with cheese and meat and butter. 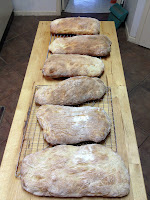 I make ciabatta every other day.  I make it for friends, family and for functions.  It's my constant party piece. This is what my kitchen generally looks like.  A friend had taken me out to lunch and  I made her a few "thank you" loaves because she, and her boys, love this stuff.

I have to add, this stuff freezes beautifully!  Do an assembly line of batches and you can be the bread delivery fairy like I am.  It's fun.  I only transport this bread in paper because it steams and gets funky in plastic.  Wrap it in foil if you're leaving it on your counter as you use it.  IF you put bread in the fridge, don't tell me because I'll never make this for you if you do.  Fridges dry out bread, even in plastic, just don't do it.

I can bang out ciabatta without even thinking anymore.  It's a gooey slimy mess but I can work it easily these days.  I wondered what would happen if I made the same dough and changed the method of it...  this is what happened.

The alchemy loaf is one gigantic boule.  It's got a hard, crisp crust that's salty (I sprinkled salt on it) and a thick but light interior that's stretchy and chewy and flavorful and FULL of beautiful holes. 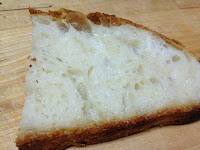 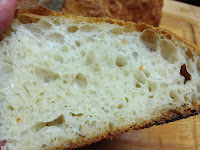 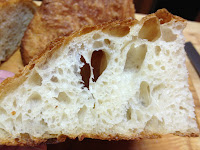 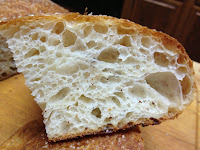 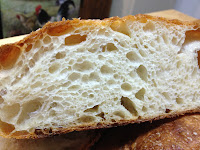 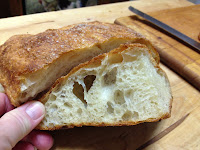 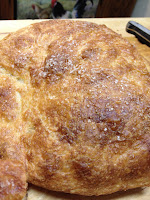 This is what I did.

I made the ciabatta dough as usual but did NOT grease the proofing box/bowl/vessel. I let it triple. For comparison, it takes about 50 minutes for mine to go from the 1 litre mark on my box to the 4 litre mark and start to blow the top off the box...  it will take longer in your house.  *I do realize that I have to redo a proper blog post about the ciabatta.  There's no action shots, I'll do a play by play and new post the next time I make it, I promise*
http://www.tracycooksinaustin.com/2010/06/oh-yes-you-can-live-on-bread-and-water.html
http://www.tracycooksinaustin.com/2012/12/ciabatta-my-new-version.html

Here's where I ventured off the beaten path. I put WATER on the island and with VERY wet hands (which I continually ran under the tap to keep them wet) I pulled the dough from the proofing box and put it on the wet island.

I folded it over itself, spun and turned it, like you're making puff pastry, 3 times, flipped it upside down and put a VERY large metal bowl over it and left it 40 minutes.

After the second folding rise, this stuff felt like soap bubbles and every time I handled it, I could feel the bubbles inside it pop so I was VERY careful.  I gently transferred it to a heavily olive oiled parchment paper lined baking sheet.  I carefully flipped it over so that both sides were lightly oiled.  I lightly salted the top (in hindsight, I would salt it less!).

I preheated my oven to 450 degree (F) and the dough sat on the counter while I waited.

I baked for 20 minutes, spun the loaf and baked for another 20.

It was dark and sizzling (from the oil) and the top crust was shatteringly crisp.

I waited the excruciating 45 minutes to slice into it and you've seen what greeted me.

Try it with water instead of flour.  It's remarkable the difference in the texture of the crust, the crumb and the flavor is different too.

IF you want to try a smaller loaf, use this half recipe:

In the bowl of a kitchenaid mixer put:

Beat on HIGH with the paddle attachment until the dough climbs the blade.  Do NOT add more flour, it should look like cake batter, don't fret, it'll work, I promise.

With a WET hand, remove dough from paddle and put the dough hook on the machine.

Turn it to HIGH and let it go until the dough completely clears the side of the bowl and isn't sticking (much) at the bottom,  It will be smooth and shiny!

Transfer to a floured or wet surface by pouring it out.  With wet or floured hands, fold the dough and cut into 2 for ciabatta or leave whole and follow instructions for boule above.

for ciabatta; bake for 17 minutes, spinning half way through in a steamed oven (put ice cubes in oven with bread)

I want to see pictures of what you make,

/enjoy
Posted by TracyCooksinAustin at 9:58 AM